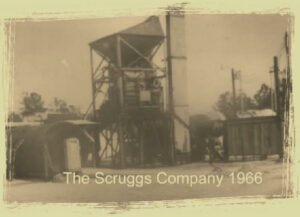 The Scruggs Company was incorporated in 1965 in the State of Georgia. Brothers Kenny and Ferrell Scruggs were principals in the new business that was an extension of the concrete – masonry sand business started earlier by their father, Mr. Fred Scruggs. The business grew to include concrete plants, asphalt plants, sand plants and a considerable volume of highway/sitework contracting work.

In 1981, the operations were split into two separate businesses. Ferrell Scruggs Sr. would be the principal of The Scruggs Company which would keep its focus on contracting work (including asphalt plant-mix production) and on the on-going sand plant operations. Kenny Scruggs would be the principal of a new corporation called Scruggs Concrete; its focus would be on concrete ready-mix as well as block and the building materials.

In 1996, Ferrell Scruggs Jr. was made president of The Scruggs Company. Under his leadership, the company has continued to grow and experience success. Currently, permanent asphalt plant-mix facilities are established in Valdosta, Cordele, Thomasville and Lenox; permanent sand plant operations are located in Berrien County, Cook County and Montgomery County. In addition to the South Georgia/North Florida business, the geographic work area for construction projects has expanded to include all of the Southeastern United States with heavy concrete paving projects having been completed in locations as far west as Shreveport, Louisiana and as far north as Cherry Point, North Carolina.

In May 2018, The Scruggs Company, led by president Ferrell Scruggs, Jr., was acquired by Construction Partners, Inc. (NASDAQ: ROAD) (CPI) of Dothan, Alabama. CPI is a civil infrastructure company specializing in roadway construction and maintenance and operates throughout five southeastern states. The “platform” acquisition of The Scruggs Company represents CPI’s 16th acquisition since its founding.

In October 2021, Everett Dykes Grassing Co., Inc., which is a subsidiary of CPI, merged with The Scruggs Company. The Everett Dykes Grassing Company is located in Central Georgia and actively operates three asphalt plants and two soil cement plants. Mr. Everett F. Dykes Sr. started the company in 1961 and upon his death in 1989, two of his sons took over the operation, Jerry Van Dykes and Richard A. Dykes Sr. In 2016, Steve Raffield was named President of Everett Dykes Grassing with the brothers staying on as project managers. Following the merger with The Scruggs Company, Steve continues to supervise the Middle Georgia Division in the role of Vice President. Reece Akins leads The Scruggs Company as President, along with Mathew Bailey, Chief Financial Officer, Billy Joe Lovett, Sr. Vice President and Susan Downing, Controller/Corporate Secretary.

This link leads to the machine-readable files made available in response to the federal Transparency in Coverage Rule and includes negotiated service rates and out-of-network allowed amounts between health plans and healthcare providers. The machine-readable files are formatted to allow researchers, regulators, and application developers to access and analyze data more easily.